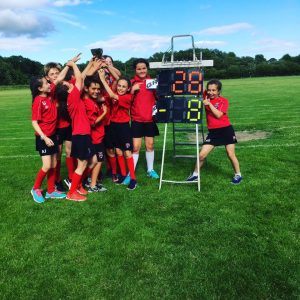 Following on from Ghyll Royd’s Cricket final win last Tuesday, our U10s have been named the winners of the School Sports Partnership’s Rounders League.

Form 5 pupils in our mixed rounders team went unbeaten throughout the season, with Menston Primary School narrowly losing out in the semi-final.

In the final, held at Ilkley Grammar School on Friday, pupils played Addingham Primary and won 28 – 8! It was a fantastic end to the school year for Ghyll Royd and the children have certainly started their summer holidays on a high.

Congratulations to our Rounders league and cup winners!

Well done to all teams who participate in the School Sports Partnership, and a very big thank you to the pupils and representatives from Ilkley Grammar School and organiser Peter Blackwell for running these fantastic sporting events.

You can learn more about the School Sports Partnership here.

See the full league table below.