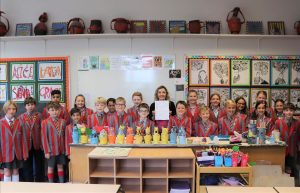 Pupils and staff at Ghyll Royd School and Pre-School are celebrating their new Artsmark status.

Artsmark is the only creative quality standard for schools, accredited by Arts Council England. It supports schools to develop and celebrate arts education across the whole curriculum, therefore bringing learning to life for children and young people.

How did Ghyll Royd achieve this?

The Ilkley Primary has developed their arts provision to embed a broad and balanced curriculum in order to achieve this award. Staff pledged to commit and deliver a plan to embed the arts across the whole school.

Ghyll Royd was supported by We are IVE in the planning and development stages. We are IVE worked alongside the school to support their progress with the award.

The assessor’s feedback noted: “Ghyll Royd School and Pre-School has used their Artsmark journey to deliver arts across the school, increasing teacher confidence in teaching the Arts and building their offer across the school, to teacher trainees and to other schools via the Wharfedale Art Competition and to local families via events, for example: a children’s and adult’s Clay Club and Stay and Play sessions.

“The teachers value each arts subject and promote arts and culture for the value they have and have started to develop the voice of children further by involving them in planning and delivering the arts and cultural experience.” 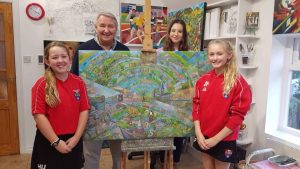 Headteacher David Martin said: “We’re extremely proud of achieving our Artsmark Silver Award. We deliver high-quality arts and cultural education and are looking forward to growing further with Artsmark. This would not have been possible without Art lead Miss Smith, Music lead Mrs Coultas, the full support of the teaching staff, and of course, the children who make teaching the arts such a joy! As a result, Ghyll Royd has been rewarded, adding to our long list of accolades.”

In recent years, Ghyll Royd has achieved four consecutive appearances in the shortlist for Independent Schools of the Year Awards, twice as finalists. This year, their focus has been on securing the Artsmark status within the Wharfe Valley. The Ilkley Primary is one of ten Artsmark settings in the Leeds/Bradford area, which includes nurseries to universities.

The Silver award is the second arts award for 2021. In February, 8-year-old pupil William achieved first prize in the National Independent Schools Association’s Art Competition. His piece ‘Caravanning on the Moon’ won the Textiles award for his age group. ISA Art features the best artwork from over 520 schools. 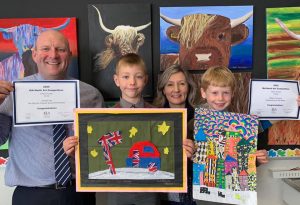 William with his winning artwork

“I would like to congratulate Ghyll Royd School and Pre-School on their Artsmark Award. Becoming an Artsmark school shows that through offering a broad, balanced and creative curriculum, young people develop character and resilience, increasing their knowledge, curiosity and skills that will remain with them through to adult life.”

To find out more about the award, visit Artsmark.org.uk.

See what makes Ghyll Royd an artsmark school by viewing this Sway.