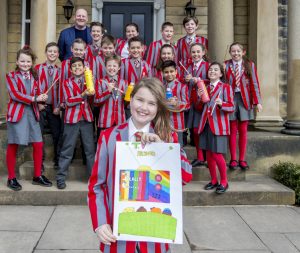 If you see Evie in Form 6 around school this week, her smile will be even bigger than usual, as it has been announced that she is this year’s winner of the Ilkley Carnival Cover Competition!

Her bright and dazzling design blew the judges away and was selected to appear on the cover of this year’s Carnival programme. The theme this year is Television Programmes, and Evie’s design displays a family sat watching a rainbow-patterned TV from their vibrant green sofa. Evie’s artwork will adorn the cover of the carnival’s programme and will be seen by around 10,000 visitors at the event on Monday 7 May.

Ilkley Carnival’s chairman Andrew Stacey, who heads the committee of judges, said this year’s entries were the most colourful ever.

“There were many stand out pictures but Evie’s rainbow TV set and vision of happy viewing caught the eye of all our judges. We have a strong second place from fellow Ghyll Royd pupil Juliet Freegard for her garden of acrobatic television sets.”

Simon Hinchliffe, head teacher of Bradford Grammar School, said the school’s art team is looking forward to welcoming Evie and her classmates into the school this summer. He added: “There is clearly a lot of artistic talent in Ilkley and we’ve planned an afternoon of arts and crafts to really inspire, excite and encourage the children to further explore their talents!”

Ghyll Royd art teacher Keeley Smith who co-ordinated the entries added: “We’re incredibly proud of Evie who put a lot of hard work into her entry and is absolutely delighted to win! Evie came runner up in last year’s competition, so she’s shown great improvement to go on to win with her latest design. We’re thrilled to be spending an afternoon with Bradford Grammar School’s arts team – I’m sure it’ll be a memorable experience for us all.”

Ilkley Carnival starts on The Grove with a 1,000 strong parade, sponsored by Anytime Fitness and entered by schools, local groups and organisations. Finishing at the East Holmes Field parade ground on Denton Road, an afternoon of family entertainment is provided including the annual dog show, classic car show and the soon-to-be-revealed headline act.

Congratulations to Evie! This is a tremendous achievement which you worked so hard towards. We can’t wait to see the design on the cover and we hope you enjoy your prize! Well done also to Juliet for placing as runner up for another beautiful design!

This is Ghyll Royd’s second consecutive success in the competition, with Ava in Form 6 winning last year.

All profits raised from Ilkley Carnival go back into the local community with primary beneficiary The Burley Joint Scout & Guide Group receiving half of this year’s profits. If you’d like to show your support by sponsoring the carnival or volunteering your time, please contact Andrew Stacey on 07951 890836.