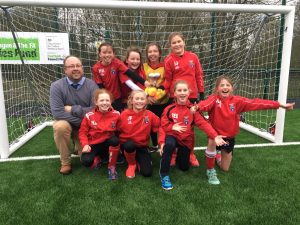 Congratulations to the U11 Girls Astro Football Team who have won the Europa League!

The Europa League is the second tier of the Astro Football League which is part of the School Sports Partnership. Ghyll Royd’s Girls’ team has been going for six years, and this is their first time winning a trophy! The team comprises of players as young as 7, up to 11 years old.

“In our first game of the afternoon, Ghyll Royd faced Ben Rhydding Primary. The first half went goalless and coach Mr Laycock gave an uplifting team talk and after that we had a new-found confidence. Two goals were scored by Ghyll Royd, sending us flying into the lead. Ben Rhydding managed to score past us at the very end of the game, but that wasn’t enough and we ended the game 2-1.”

“In the final we faced Addingham Primary. This match determined whether we won the trophy. We were nervous but excited and after huddling together for a team talk, we were ready to hit the pitch! Juliet scored a cracking goal, starting the game off superbly. Bea also scored, and Ava assisted Bryony with a finisher which put Ghyll Royd ahead 3 goals to 0. The final whistle blew and we knew we had won the cup! Mr Laycock was so happy! We were too!”

“Six years or so ago I was asked if we wanted to play the girls in a Friday night football league. With some trepidation as to numbers we decided to do it. Initially, anyone with two legs played but the girls loved it. We’ve had some real downs, some real highs, own goals, tears, hypothermia on occasions and almost single handedly sunk a Christmas carol service. But every year the girls have loved it, played the game in the right spirit and made me proud. Tonight we won our first ever girls football trophy so this is dedicated to all the GR girls, past and present, who have braved Friday nights and developed a tenacity and bond that I’ve always been proud to be associated with.”

Well done girls, you should all be immensely proud of your achievement, as we certainly are!

A great big thank you to Mr Laycock and all our PE staff who coach and train our pupils to be strong team players and brilliant athletes. Many thanks also to Peter Blackwell and the Sports Leaders at Ilkley Grammar School who turn up every Friday to organise and referee these fantastic sporting events.

Find out more about the School Sports Partnership.