Talented Form 5 pupils Ava, Evie C and Bea took to the stage at Ilkley Carnival on May Day to accept their prizes for their winning submissions in the Carnival’s Cover Competition.

The pupils made their designs in Mrs Smith’s Art lessons last term and Ava’s was picked by a panel of Carnival judges as the winner. Her picture was chosen as the cover for this year’s Carnival programme which will have been seen by thousands of visitors on the day.

Evie C and Bea were 2 of 3 runners up with their fantastic designs.

After the Carnival Parade, crowds gathered at the bandstand where a stage had been set up for entertainment and the awards ceremony. One by one the girls were asked to get up on stage to receive their framed designs, a goody bag of treats from Bettys and to have their photograph taken.

For her winning design, Ava has also won a cookery class with Carnival sponsor Tesco and her design has been printed onto thousands of bags which shoppers can purchase in the Ilkley Tesco.

We’re very proud of the girls’ achievements and for representing Ghyll Royd at Ilkley Carnival. They are a talented bunch and we hope they enjoyed the ceremony! 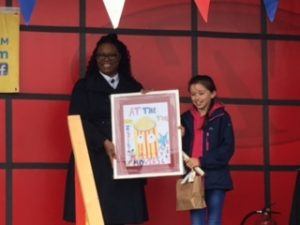