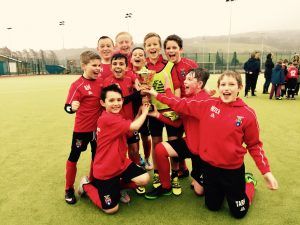 On Friday afternoon, Ghyll Royd’s U11 boys’ football team went to Ben Rhydding for the last leg of the Europa League tournament. The Europa League is the second-tier of the Astro Football League.

First Ghyll Royd faced Menston Primary and won their match 1-0. Then the Ghyll Royd boys faced Addingham Primary School. The team were showing no signs of stopping and won their second match of the day 2-0.

Then it was on to a winner takes all finale where Ghyll Royd played Burley Oaks. The boys worked hard and their dedication to the tournament paid off with a final score of 2-0.

Well done to our U11’s team, champions of the Europa League!

Many thanks also to Peter Blackwell and the Sports Leaders at Ilkley Grammar School who turn up every Friday to organise and referee these fantastic sporting events.

Find out more about the School Sports Partnership.