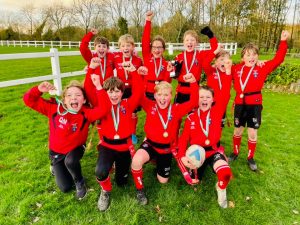 Ghyll Royd’s U11 Rugby team visited Knaresborough on the 26th of November for a schools tournament.

The Ghyll Royd team played six games over the course of the afternoon, winning each one:

Due to the level of local covid cases at the beginning of the year, the children have spent most of the term practising vital skills for the game with Coach Hedley Verity from Wharfedale RUFC. Their continued practise and growing skills have certainly paid off on their first fixture of the year.

Next half term, Ghyll Royd brings a full calendar of sports fixtures ranging from football, to netball and hockey. The children hope to maintain their winning streak as they meet with other independent schools and local primary schools within the Wharfe Valley and North Leeds / Bradford areas.

The children will also be travelling further afield for fixtures in Giggleswick and Sedbergh in the near future.

Sports Captain Jess said: “It was a great tournament and we played so well.”

Sports Captain Harry agreed: “We have some great players at school and we chose a team today that works well together and it paid off.”

Sport forms a large part of life here at Ghyll Royd School. To find out how our children enjoy an average of 10 hours of outdoor/physical education per week, visit our Physical Education pages.