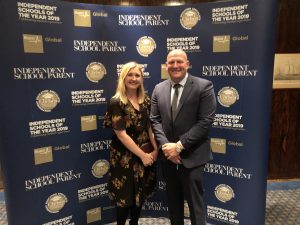 A West Yorkshire Primary School has been ranked as the top small school in the North of England in a celebration of the Independent Schools sector.

Ghyll Royd School and Pre-School in Burley-in-Wharfedale were finalists in the Independent Schools of the Year Awards 2019. Headteacher David Martin and Communications Manager Rebecca Wilson travelled down to London on Monday 7th October for the finals.

There were 150 schools, ranging from small, rural pre-preps to household institutions in attendance at the Royal Thames Yacht Club, all eagerly awaiting the results of the 20 categories in the awards. Whittled down from over 250 nominees, Ghyll Royd School and Pre-School were one of three institutions up for the Small Independent School award and one of five Yorkshire schools in the finals. The award recognises schools with 150 or fewer pupils which allow children to grow and develop through access to meaningful and innovative programmes. The awards scheme was launched in 2018 by Independent School Parents Magazine and this year’s event was sponsored by Bupa Global.

The independent judging panel said they were “overwhelmed by the inspiring stories”. Dr Helen Wright, Chair of the Panel continued: “It is evident that the sector is thriving and across all areas, including academic excellence and pupil wellbeing.”

“I couldn’t be prouder of the strides we have made over the last few years. To be recognised as the one of the top three small schools in the country, alongside these fantastic institutions is something we should all celebrate.

This achievement would not have been possible without the dedication of our staff, the love of learning from our children and the support from our wonderful families. Thank you for the hundreds of messages of well wishes.”

This year’s achievement adds to a long list of accolades for the School. Improving on their shortlisting in the 2018 awards, Ghyll Royd has recently achieved a Gold School Games Mark, Gold in the Green Tree Schools Award, a fifth year of consecutive SATs and Entrance Exam success and is now working its way to becoming an Platinum Artsmark School.

Chair of Governors, Phil Stephenson, shared his pride: “The quality of the work and effort put in to making Ghyll Royd such a brilliant place to be is now quantified by the many accolades held by the school. No other school in the area offers a varied, quality curriculum with such a warm family feel.

Mr Martin and all the staff have worked tremendously hard to provide the very best education for children aged 2-11.

The governing board and I welcome all to our Open Day on Saturday 9th November to share the secret of our success!”

Ghyll Royd will be celebrating this news in their 130th year with an anniversary ball. The official Open Day is Saturday 9th November alongside the Cross Country. Tours and visits are available all year round. Visit our Visits to Ghyll Royd page for more information. 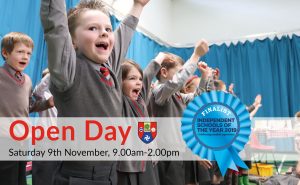 Theatre of Dreams becomes a reality!

Outdoor learning – a breath of fresh air to education