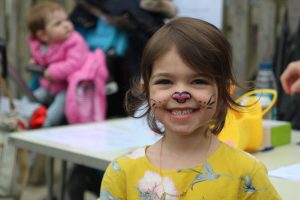 Thank you to everyone who turned out for the Ghyll Royd Egg Hunt on Sunday 28th April. The school grounds were mapped out with clues provided by each class and school house.

Ghyll Royd pupils were asked to raise money for a sponsored mile – the length of the egg hunt. The proceeds from the sponsorship forms will go towards Ghyll Royd’s Theatre of Dreams.

A range of activities and items were also on sale to raise money for our newly formed PTA.

The cake sale, refreshments and ice cream van were delicious additions to the Bring-Your-Own picnics. The eggstra entertainment was provided by Baildon Bouncy Castles including an inflatable slide and penalty shoot out. Families also had face painting and a coconut shy! Thanks to the generosity of all who attended, the PTA raised £727 which will help fund more events!
In total 66 children took part in the sponsored walk. We were delighted to welcome some of the new Ghyll Royd families, as well as several members of the public. Each member of the school who participated will receive one house point.

Special thanks go to everyone who helped make the event so successful. Thank you to all those who donated eggs and sweets for prizes, to the amazing bakers and of course to the volunteers who helped set up, clear up and who helped out during the event. The day would not have run as smoothly without you.
You can look at all the photos taken by Miss Brown on our Facebook page.
Conveniently situated on the A65 between Ben Rhydding, Ilkley and Burley in Wharfedale, Ghyll Royd School, Pre-School and Nursery is ideally located for families living in or commuting to the surrounding cities, towns and villages of Ben Rhydding, Ilkley, Burley in Wharfedale, Addingham, Menston, Guiseley, Baildon, Bingley, Otley, Leeds, Bradford, Harrogate, Skipton and Keighley.