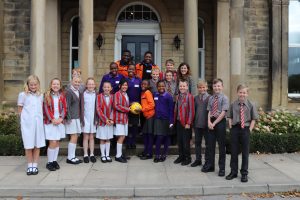 Children from Kenya have spent the past week touring Ilkley as ‘The Singing Children of Africa’ choir. The group, put together by the Educate the Kids charity, have performed several shows in the area, finishing at Ghyll Royd School last week.

The choir spent the full day at the school with pupils, learning more about each other’s lives in the UK and in Mombasa, Kenya and playing fun games together in the playground. Remembering the games they played last year, Ghyll Royd pupils grouped together and purchased a brand new football for the choir to take home with them.

Before the choir’s performance, they taught children in Ghyll Royd’s Key Stage Two class their dance routine for ‘This is Me’ from the film ‘The Greatest Showman’ – a favourite of many of the Ghyll Royd children. The choir and pupils worked really well together and put the routine together in under 30 minutes! 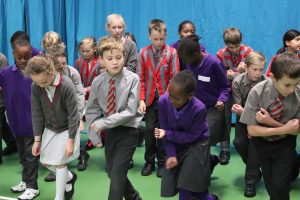 After lunch, the choir began their show to a crowded hall filled with pupils, teachers, parents, grandparents, and visitors from the local community. Residents from Burley Hall also attended with family members and carers. The phenomenal performance included songs ‘Here Comes the Sun’ by The Beatles and ‘What About Us’ by P!nk.

Ghyll Royd pupils joined the choir on stage for the finale, surprising parents and visitors with their performance. Concertgoers all donated to watch the performance, adding to the total of Ghyll Royd’s other fundraising events. Each School House was tasked with creating a fundraising event for the choir’s visit. So far, the children have organised a fun run and a pie throwing contest. At the end of October, the final fundraising event will be a Halloween treasure hunt. Children bring in 50/£1 to take part in the events, with all the money going towards the Educate the Kids charity.

Headteacher Mr David Martin said: “The choir blow us away every time we see them perform. This is their second visit to the school in recent years and we are so humbled by the children’s kindness, love and talent. The children are so special to us and we thank them for coming to visit us and spend time with our pupils, who really enjoyed making new friends. Thank you also to Yvonne Craig who co-organised the visit and dedicates her time to helping these wonderful children.”

How you can help

The children on the tour are sponsored to go to school, to have lunches and some of the older children are then sponsored through their teacher training. For just £11.00 a month, a child can be fed and educated at the Jolaurabi school in Kenya. More information on the charity and sponsorship is available at www.educatethekids.com.

Coverage in the Ilkley Gazette.