The 2018 World Cup has got everyone talking – even our Pre-School children! Great Explorers have loved expanding their knowledge of the world by learning more about the different competing teams.

The class cheered on England by having their faces painted with the St George’s Cross ahead of their first game against Tunisia. The boys and girls have taken a real interest in the tournament by learning about each country’s flag and where they come from in the world.

They made brilliant bunting and their own football kits to make ‘Ghyll Royd United’. The bunting was made from the different countries’ flags which the children copied then wrote out the names of. There were some very tricky and unusual words to spell out but the Great Explorers did a tremendous job, with brilliant handwriting! 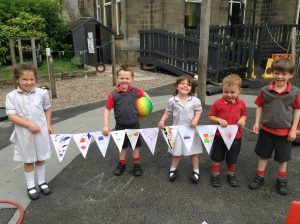 Finally, the children used their memories to remember the flags in a corners game. Miss Coulton called out a country and the class ran to the correct flag. Football fever is certainly in the air in Ilkley! Is football coming home?!