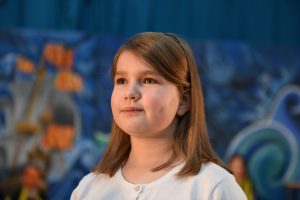 Congratulations to Evie in Form 6! Following a successful audition process, Evie will be performing with Opera North in their production of ‘Tosca’. The Autumn performances run from 16th September to 16th November in Leeds, Manchester, Hull, Newcastle and Nottingham!

Evie has developed her talent for singing at Ghyll Royd with Music teacher Mrs Coultas and has performed beautifully in several concerts and performances over her time here – her most recent as Miranda in ‘The Tempest’. In September 2017 she became a member of Opera North’s Children’s Chorus which presented the opportunity for her and other chorus members to audition for this brilliant production. Best of luck to Evie – what a fantastic opportunity!

Tickets and further information can be found on the Opera North website.

Below is a performance with friend Bea from last year’s Palm Court Afternoon.