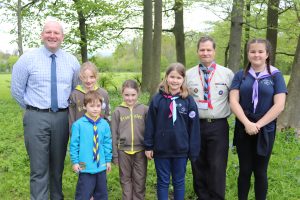 Pupils welcomed scout leader David Shaw MBE into school last eek to learn about the story of St George – the Saint of scouting. David shared stories of his own work with the scouts, including his meetings with royalty and he explained to pupils the work of the scouts.

Children who are part of a guide or scout group came to school dressed in their club uniforms to show each other their badges collected through different activities and achievements. David noted how the work of the scouts involved the outdoors and teamwork, many points which are deep rooted in Ghyll Royd’s own values.

Thank you David for visiting and sharing your stories with us.