Well done to all pupils for taking part. A special mention goes to Georgie in Form 3 for coming Joint 3rd in the Year 3 Verse Speaking; to Jemima and Phoebe R in Form 5 for coming Joint 2nd in the Year 5 Verse Speaking and to Bryony, Juliet, Phoebe C, Phoebe R, Heidi, Tiarna, George and Jemima for coming first in their Year 6 and Under Choral Speaking performance of Little Red Riding Hood. The judges gave brilliant comments about your confidence, clarity, speech and dramatisation. Congratulations! 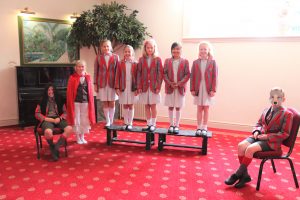