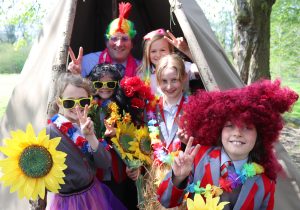 Ghyll Royd School is putting on its very own Music Festival for its annual family social and charity fundraising event. The sell-out festival, which will be set in the beautiful school grounds, has received tremendous support from pupils, staff, parents, and members of the local community. Ghyllstonbury has been organised by staff and volunteers from the school and will feature local artists, food, drink, face painting and more, all set under a giant teepee provided by BarEvents UK.

The proceeds from the event will all go towards the school’s ‘Theatre of Dreams’ appeal – a 140 tiered seating structure for future educational and community events and performances. Ghyll Royd School has previously hosted performances by the Military Wives, the Singing Children of Africa and talks by Channel 4’s Brendan Sheerin. This one-of-a-kind event features a fabulous array of musical talent that includes Ghyll Royd’s very own singer Maddie Holland; local folk ensemble Jo’s Elastic Band and Ceilidh band Frigga before they embark on their Ireland tour.

Ghyll Royd School and Pre-School’s Headteacher Mr David Martin said: “A lot of hard work and effort has gone into organising this unique event. Ghyllstonbury would not be possible without the support of Ghyll Royd staff, volunteers and the artists performing on the day. As a sold out event, we hope to provide families with a fun day out here at Greystone Manor, one that will be remembered for years to come! The money raised from the event will go towards the Theatre seats, enhancing our school’s performances and events and also benefitting the local community through hiring out our multipurpose hall for screenings, performances, events and more.”

Ghyllstonbury Festival will be officially opened by Ilkley Councillor Anne Hawkesworth. Full details of the event and other Ghyll Royd School events can be found on the Events page.