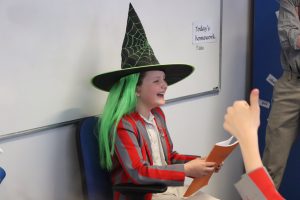 Children in Form 6 have all received their entrance letters to Hogwarts this week! Mr Coleman and Mrs Marshall have been teaching the class all about the brilliant fantasy story of Harry Potter.

In their most recent English lesson, pupils watched the sorting hat scene from Harry Potter and the Philosopher Stone. Using their persuasive writing skills, the class had to plead their case to the sorting hat and write a convincing argument on which Hogwarts house they would like to be sorted into and why. Using modal verbs such as should, ought to, must, could etc., the class created their speeches before meeting the sorting hat…

All the children gave very convincing arguments. Mischa said she could be sneaky like a Slytherin; Joshua sweetened up the sorting hat by referring to it as “My superior”; Lucy thinks she’d be a great Quidditch player for Gryffindor and Fran loved the Hufflepuff house badge! At the end of their speech, Mr Coleman asked for a vote from the class as to whether their peer had managed to convince them and the sorting hat.

Well done to all of Form 6 for getting in to Hogwarts and the houses of your choice! Read some of their speeches below: