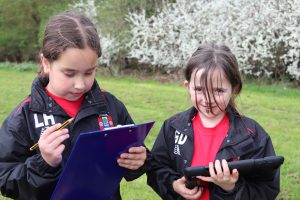 Forms 3 and 4 have been learning about living things and their environments. In their science lessons this week they have been focusing on how the plant kingdom could be divided into smaller groups.

They discussed the four groups which scientists use to categorise plants and thought about the examples for the different types of plant: conifers, flowering plants, plants which produce spores and plants with no roots or flowers. They then went into the school grounds to see what different types of plants they could identify growing in fields.

Once they had spotted a plant, they wrote down its name and features, and another member of the group took a photograph on the iPad for evidence. Pupils enjoyed exploring the outdoors with the iPads and were enthusiastic to explore and spot as many plants as they could inside the lesson time.