Talented Primary School pupils dazzled family and friends in their performance of ‘The Tempest’. Ghyll Royd pupils in Forms 3-6 performed the Shakespearean classic to a packed Sports Hall on Wednesday 28th March 2018. For some, this was their very first experience of acting on stage, and for Form 6 this is their last Ghyll Royd performance before heading to Secondary School in September.

Well done to all of the Key Stage Two cast! Your acting, performance and singing was brilliant, and had the audience captivated by another brilliant Ghyll Royd production! Thank you to Key Stage Two Staff and special thanks to the brilliant Mrs Coultas, our Specialist Music Teacher, for putting on a phenomenal show, a fabulous end to the Spring term! 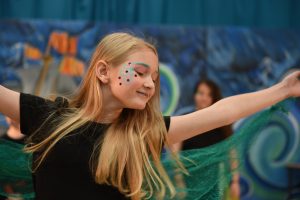 Plot: Prospero and his daughter Miranda have been marooned on a dersert island for twelve years after being betrayed by Prospero’s brother Antonio.

Prospero is determined to seek revenge for the wrongs that have been done and so using his magic powers and with the help of Ariel, the Spirit of the island, he summons a mighty tempest.  The passing ship and its passengers are brought onto the rocks, among the survivors are Antonio and other treacherous characters who plotted against him.  All are eventually brought to justice after plenty of mischief has taken place.