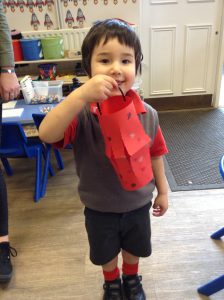 To celebrate the Year of the Dog, Early Years learnt about Chinese New Year and celebrated by taking part in lots of different Chinese traditions.

Little Adventurers made noodles to try for their snack. The children giggled and thought they looked like wriggly worms! But they were a success with most of the group saying they were yummy. The children also did a great job at holding the chopsticks, practicing their fine motor skills to pick up the wiggly noodles. They had another taste experience with prawn crackers! They went down a treat!

Great Explorers made willow patterns on paper plates, a traditional pattern on Chinese tablewear. They also put their fine motor skills to use by practicing picking up objects using the chopsticks! They even received a visit from Miss King’s dog Holly, and Miss Coulton’s dog Jenson!