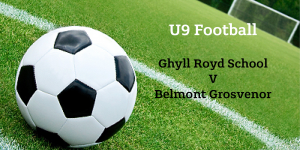 On the 21st February 2018 we set off in the minibus raring to go and play Belmont Grosvenor School. The team comprised of Freddie B, Josh, Sonny, Quentin, Freddie L, Jamie, Thomas, Max and Reuben. When we arrived we had an intense team talk with Mr Laycock to discuss tactics. In the first half we dominated because we held possession of the ball and due to a timely pass by Josh, Freddie B scored an immense goal in the bottom right corner, straight past the keeper!

Our epic coach Mr Laycock gave a rousing speech which spurred us on ready for the second half. Back on the pitch Thomas made an amazing tackle and passed to Josh who took it on his left foot before shooting for goal, scoring in the bottom left. The final goal scored by Freddie was achieved after running through the opposition. Reuben and Quentin were fantastic at the back defending and put in some great tackles. With Sonny and Jamie proving great goalkeepers, Max bravely took the penalty for the team and narrowly missed hitting the post.

A fantastic win for Ghyll Royd, 3-0. Thank you to Mr Laycock for being our inspiring coach.