In their Maths lesson, pupils used their own bottles to see which container held more water. The children would fill up their water bottles from the tap then pour it into a measuring jug and write down the measurement. Then using a different container such as a coffee mug or a plastic cup, they measured how much water could fit inside.

The results showed that the plastic cup held less than their water bottles, but the coffee cup held more. Once each child had experimented, they drew their answers on a work sheet.

The children demonstrated brilliant problem solving skills and could recognise the difference in the large numbers. Pupils are being challenged to use the correct language when talking about water and capacity, using the words millilitres and centilitres to measure the water in the jugs. They are also developing their understanding of comparative language, understanding the use of ‘more’ and ‘less’ to describe the differences. All the children showed great initiative and enjoyed the independent learning of measuring in turns.

Later in the week, they filled cups with water and decorations before storing them in the freezer overnight to see what would happen. 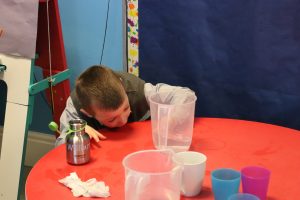