Great Explorers have been learning about polar animals this week, and focused on penguins for a crafty activity.

For Treasure Bags this week we were asked to bring in a polar animal. Some of brought seals, some brought penguins and some brought polar bears! Furry, fluffy friends. Mrs Johnson and Miss Coulton started to tell us about how penguins and polar bears never meet, because they live on completely the opposite sides of the world!

Miss Coulton told us all about penguins, what they look like and where they live. She then told us about 4 different species: Emperor; King; Crested; and African penguins. 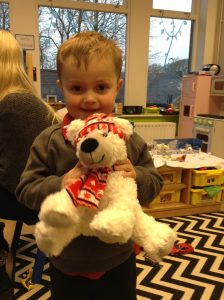 Then it was time to sit down around the crafts table and create our own penguin. Using scissors and Ig-glue, we put different shapes together to make our penguin pictures. Each penguin looked very different, from the shape of its beak, to the size of its wings. Matilda made a Crested penguin with its wacky orange and yellow hair, and Jake made an Emperor penguin.