Every Year Form 6 teacher Mrs Marshall sets an exciting task for the last week of the Autumn Term. Each pupil is set with the task of making a Christmas project of their choice, and over the years there have been some extremely innovative, tasty, thoughtful and creative projects. This year was no exception!
Bea made a dolls house, Mischa made a Celebrations wreath, Daniel made an Alpine Village, and Charlie made a shortbread piano marked with Christmas Number One Singles.
Runner up was Fran who made a football pitch to commemorate the Christmas Day truce during the War. The pitch was covered in markers which had propaganda posters and old cigarette packaging on one side, and facts about the War and the Christmas Day truce on the back.
After a difficult judging process, Evie was named the winner with her delicious and delightful snowman cake with expertly piped icing. Well done!
These projects are wonderful and each pupil should be very proud of their efforts! 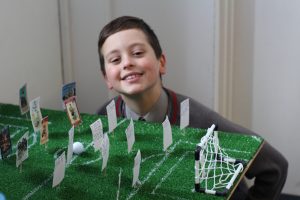