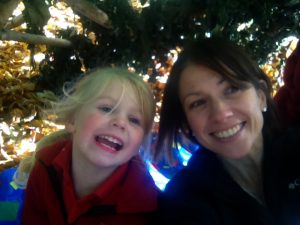 Following on from a weekend of bonfire parties, the children talked about what they had been up to then created some fabulous firework paintings using glitter and paint. Using a cut up kitchen roll tube, the children made bright firework patterns. In a box filled with glitter, the Little Adventurers practiced mark making by drawing lines and fireworks with their fingers.

As it gets colder, boys and girls need a snack that will warm them up so Mrs Davis and Mrs Watson had a great idea! Using a tealight, the Little Adventurers put their marshmallows on a stick and toasted them in the classroom. They then dunked the melted marshmallow in chocolate and squished it between two biscuits to make s’mores! Yummy!

Later in the week, the children went outside for story time where they sat and read ‘It’s the Bear!‘, a story about a boy who’s scared to go outside for a picnic because of the giant, hungry bear who lives in the woods. The children love outdoor activities, so it was great for them to put on their waterproofs and head outside for this special story.

A really great part of the week was when the Little Adventurers went out to the Forest Schools area and built a den! Lifting heavy logs and sticks, the children assembled a den, and covered it with a sheet. They put a blanket on the forest floor to make it comfy to lie on. After all that heavy lifting, the children had a well deserved lie down!