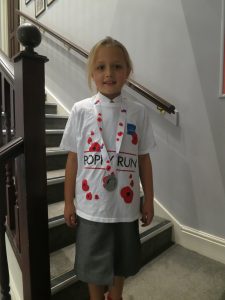 Sienna in Form 3 and her dad took part in the Poppy Run at Temple Newsam on Sunday 5th November, organised by the Royal British Legion.

The 5k charity run was open to all and was part of a series of running events held around the country.

Held during the Remembrance period, the Poppy Runs are a way for communities and families to remember those who risked their lives whilst taking part in a fun, fundraising activity.

The event began at 11am with a two minute silence before Sienna and her dad set off. Sienna received a medal for taking part and a Poppy Run t-shirt.

All week pupils are remembering the fallen and those who sacrificed their lives for us in our annual Poppy week. Lesson activities which centre around the war and why we make time for remembrance and reflection have been planned. On Friday morning Form 6 will head to St Marys Church in Burley in Wharfedale to read out their poems at the Remembrance service.