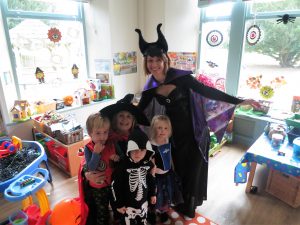 Boys and ghouls had a spooktacular day at Ghyll Royd on Tuesday as they took part in Halloween lessons and activities.

The Halloween theme ran alongside the Ghyll Royd Discovery Day where children and parents came for a visit and spent the day in Reception, Form 1 and Form 2. Our visitors enjoyed Music, Art, English, Computing and much more during their stay.

In Little Adventurers, Mrs Davis and Mrs Watson had been replaced by Maleficent and a Witch! Appearances can be deceiving and luckily these Halloween characters were just as friendly and cuddly as Mrs Davis and Mrs Watson. The Little Adventurers made ghosts using white gloves, rice, cotton wool and googly eyes! The children had to carefully scoop the rice into the glove. Their fine motor skills were tested in another activity where they had to pick up the creepy crawly bugs from the slime tub using tongs. Outside, the children created a messy potion using glitter, slime, and lots of objects that they found in the garden.

Great Explorers came to school looking fangtastic in their skeleton, pirate and witchy costumes. They gave Miss Coulton and Mrs Johnson quite the fright! Each child brought in something to do with Halloween for their treasure bags. Matilda brought in a picture of the pumpkins she carved at home with her family, and Toby brought in a ghost he’d made! The class scooped out the innards of a pumpkin and marked out the face ready to carve. We had some very strong pumpkin carvers who cut out the jagged pieces of the pumpkin’s mouth and eyes. The class also had a go at hitting golf tees into another pumpkin using real hammers which taught them responsibility, safety and tested their hand-eye coordination. Mrs Johnson said she was very impressed with how quickly the children went from gently tapping to understanding how much strength they needed to use to hit the tee into the pumpkin and they all did very well.

Reception learnt about the ‘oo’ sound as they read ‘Room on the Broom’ in their phonics session. Frankenstein, Dracula and co welcomed a visitor to their room and shared their snacks before heading up to Music with Mrs Coultas. In the afternoon, the children made glittery spiderweb pictures, created creepy crawlies using Playdoh and put them into the witches cauldron to cast a scary spell.

Form 1 had an excellent maths lesson this morning where they counted into the teens. Mrs Downes was so impressed that she had a fun maths/Halloween activity planned as a reward where the children matched up the number with a colour which they used to colour in their worksheet.

Form 2 also used instructions and learnt the importance of clear and correct instructions in order to colour in the right parts of a witch and a pumpkin. If they thought they followed the instructions correctly, they went and checked the picture at the front of the class. In the afternoon, the children drew very detailed haunted houses with wobbly walls and tiny windows in Art with Mrs Smith.

Form 3 were practicing writing down instructions as they devised their own menacing meals! The children could choose any food that they wanted to make as long as it contained spooky ingredients. Max made a Cob Web Pizza (yuck!) which was covered in bats blood.

Form 4’s Music lesson had the children concocting a spell using their ‘musical ingredients’. Mrs Coultas asked the pupils to produce a piece of music similar to Hedwig’s theme from Harry Potter which sounded spooky, eery or haunting. The class split into groups of three and got to work making their themes.

Mrs Langan and Miss King held a Halloween party in After School Club with balloons and lit-up jack o’lanterns. The children had a buffet of food and sweet treats and bobbed for apples (and pears) in traditional Halloween style. Sebastian and Amelia got their fruit in one go!

We hope all our pupils enjoyed their day, and night, this Halloween.