Please keep sending in all your wonderful achievements!

If your child has achieved something new, or has a special hobby they’d like to talk to us about, please send in your certificates/work/awards and any pictures to Miss Wilson in the School Office.

Layla in Form 3 is delighted to have received a badge and certificate for swimming 20 lengths (400m)! Layla is a keen swimmer who attends weekly lessons at Huddersfield Leisure Centre, as well as weekly sessions with school at Ilkley Swimming Pool. Well done! 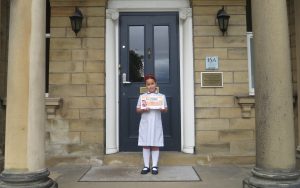 Isabelle in Form 3 is delighted to have received a Grade 4 in Gymnastics. Isabelle trains every Friday with Miss Josette from Olicana Gymnastics in the Ghyll Royd Sports Hall! Well done Isabelle, keep up the great work!