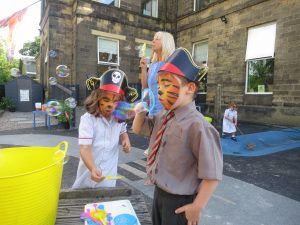 Three to five year olds were invited to Ghyll Royd Pre-School on Friday morning for a brand new event!

The Ghyll Royd Beach Party is part of a series of play dates which encourages outdoor learning and building friendships.

The Great Explorers and Reception class welcomed children from in and around Ilkley to their classroom which had been transformed into a sub-tropical paradise!

The weather, which looked to be a cloudy, dull day, transformed into a sunny, hot morning which allowed children to play outside and splash around in the paddling pool and blow bubbles into the air. Boys and girls dug in the sandpit, making sandcastles before crushing them with their feet.

Reception pupils ran an ice-cream parlour from the mud kitchen where they had made ice-cream cones and lollies which they passed around to their new friends.

Everyone was lining up to have their face painted by Miss Coulton! There were tigers, lions, fish, butterflies and a beautiful, glittery seahorse.

Pirate masks, telescopes and hats were passed around before the children headed out on a treasure hunt around the school grounds.

Captain Redbeard’s treasure map led the group around the meadow, along the fence and into the woodland area where they found the ‘X’ which marked the spot. With their spades, the children dug and dug and found GOLD! Lots of chocolatey gold coins to share with each other.

Mrs Johnson, Room Leader at Ghyll Royd said: “The first play date event has gone extremely well! Our children were so excited to welcome visitors in to the school, and they all played so beautifully together. It was great having the parents and children working together to find Captain Redbeard’s buried treasure and they definitely enjoyed their chocolatey reward!”