The event held over 100 practical and engaging workshops which cover aspects of farming, the environment and the countryside. Schoolchildren also watched a variety of livestock and animal shows outside of Yorkshire Event Centre.

In the morning, four pupils in Form 6 became turophiles (cheese connoisseurs) as they tried two different varieties of cheese. Ramsay, Rohaan, Madeline and Edward were given a checklist of things to consider when grading cheese including texture, look, smell and, of course, taste! The children compared notes on the cheeses before writing down their thoughts on what they had tried.

The group seemed to know their stuff, and even tried their hand at cutting out from the cheese blocks. Each School taking part will have their answers graded, and the top team will be invited to the Great Yorkshire Show!

Rohaan certainly enjoyed the cheese, from the look on his face!

York Chocolate Story was definitely a highlight, as you can imagine, for the children! They all made their own chocolate lollipops with freshly melted chocolate and lots of salted caramel and strawberry flavoured toppings. Each lollipop was then left to set, bagged up, and taken home.

In groups, Ghyll Royd pupils also had to think about what they had learnt from listening to the two organisers, and order the chocolate making process using flashcards.

Ladies from The Flower Acre showed Forms 3 and 4 the different types of flower grown right here in Yorkshire. The classes then explored the different scents, textures and looks of the flowers to decide which they would like to include in their cuttings.

Phoebe C said she chose her flowers based on the different, bright colours, and she was going to take it home to show her mum.

The Forms all met up to watch a Bird show just before lunch. They met Twilight the Barn Owl, Tiffin the Kestrel, and Geoff the Peregrine Falcon.

Tiffin had been kept in a budgie cage for most of his life, so the bird trainer who rescued him showed the children his progress.

Geoff was very naughty and went and sat on top of the Yorkshire Event Centre’s roof for 5 minutes, instead of coming back to finish the show!

The children really enjoyed meeting the camp leaders from Kings Camps who held several team-building, fun, outdoor activities for their session. The leaders were lots of fun, being silly and loud, getting the children really into playing outdoors.

They had a game of Tig where the leaders were sharks, and the children were fish. They chanted their ‘fishy chant’ before running past the sharks. If they were caught, they had to plant their feet to the floor and move their bodies around like a jellyfish to try and tig more of their friends.

Next, the children sat on the floor holding a parachute over their legs. Callum was chosen to be a shark who wiggled around under the parachute to find legs to attack! Sophie was a lifeguard and if she saw someone struggling, she would run around to save them. The leaders were great and gave each pupil in Form 3 and 4 a bandana to take home. 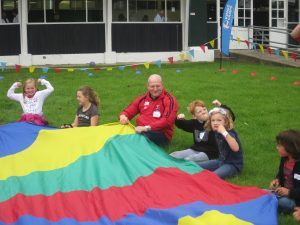 Forms 5 and 6 took their first steps as trapeze artists as they tackled the slackline. Rich from the Slackline School was really good at balancing, and shared the benefits of slacklining with the classes which include improving balance and fitness, being therapeutic  for the mind and soul, and developing focus. In pairs, they held their hands in the air and held on to each other, taking it in turns to guide the other to the finish line. It looked very difficult but through teamwork the children all managed.

Then it was time for the children to tackle the slackline alone. This was much more difficult as the line was bouncy which made the children lose balance.

Using scissors and glue, Forms 5 and 6 matched up different by-products to the correct trees they were derived from. Maple, Oak and Birch were just some of the trees they had to research and find out more about from the volunteers at Yorkshire Arboretum.

Then, pupils worked on creating their own multi-sensory picture by gluing leaves and branches, and creating bark rubbings with crayons.

There was also an unusual grub called a cockchafer that the children picked up and looked at. The cockchafer lives on the ground and feeds from roots. Emaan didn’t look to keen…

Forms 3 and 4 designed a recycled model in Art with Mrs Smith to take to the event. The Ghyll Royd Rooster, or ‘Mr Ricken’ (Rooster/Chicken) according to Sophie and Isla really impressed the judges and came in 3rd place!

To finish the day, the teachers and children gathered to watch the Sheep Show, which was a fun, educational performance about nine different breeds of sheep. One by one the presenter shared funny stories about the sheep that the children were about to meet before bringing them on to their own theme tune.

There was Nobby, Susie, Lenny, Belinda and many others who stood on their podiums.

The presenter then brought out a sheep to shear live. By placing the sheep on its bottom, the sheep became relaxed allowing the presenter to quickly sheer the wool from its body.

To finish, the sheep performed a dance routine which included headbanging, and quickstepping! The crowd could not believe their eyes!

The day was jam-packed with fun, interesting activities and workshops, with the children learning lots of interesting facts about farming, wildlife and produce.