To test how much Forms 1 and 2 have learned in Spanish this year, Mrs Smith sent the children on a word hunt in the School playground.

We gathered around Mrs Smith as she explained the objective of our Spanish lesson. In pairs, we were given a clipboard with a character drawn on the front.

We were also given 10 colouring pens to work with.

On these signposts were a bodypart and a colour in Spanish. Using what we have learnt this year, we had to translate the words on the signpost into English then colour in the correct body part on the drawing we’d been given by Mrs Smith.

There were lots of different signs, some hidden, some quite easy to find. 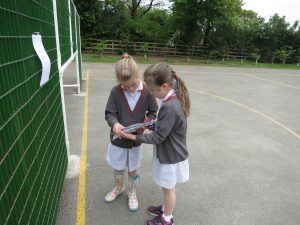 For example, over by the Adventure playground, we found that one of the character’s hands was red: ‘una mano roja‘ so we coloured one hand red.

By the gate to the Little Adventurer garden, another sign read: ‘una rodilla naranja‘: an orange knee’.

We had a prompt sheet on the back of our clipboards in case we were stuck.

By the end of the lesson, we gathered around again to check we had coloured in the parts correctly. The green-headed, yellow and blue-armed, orange and brown-kneed character looked very silly! 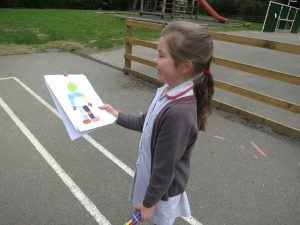 It was fun getting to work in pairs outside translating the different Spanish words and colouring in the correct parts.

Mrs Smith said: “Hearing the children practicing their Spanish, and their Spanish accents, out loud was fantastic as it showed how much they can learn at such a young age. Harry in Form 2 even came over to tell me he didn’t have an ‘amarillo’ [yellow] colouring pen!”