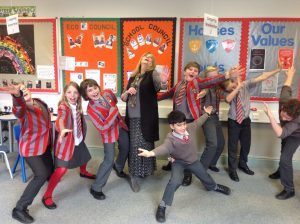 Drama Club returned for most pupils this week, but for Forms 3 and 4 it was the first time meeting Mrs Hughes due to last week’s trip to Headingley Water Treatment Works.

Drama Club will run every Friday lunchtime for KS1 and KS2 pupils with Mrs Hughes, our new, Specialist Drama Teacher. You can read an interview with her here.

We got into pairs to read out a poem and practice intonation. Intonation means your tone of voice so we practiced by sounding happy, sad, silly and angry.

Next, Mrs Hughes asked us to pull scary faces that would look intimidating and mean. One by one we approached Mrs Hughes with our scowls and evil looks.

Then we all came towards her at once which gave her quite the fright!

It was really fun getting to act out different feelings and Mrs Hughes commented on how good we were.

Next Forms 5 and 6 had to improvise!

Form 5 had to improvise a narrative based on witches.

We picked our own personas and were invited to a dinner party where one of us had murdered someone.

Through body language and our own scripting, we had to hint if we were guilty. Crispin was a butcher who had mysteriously lost his knife…

The group then had to guess who the murderer was before the real culprit came forward.

We were then split up into three groups where we had to improvise a short piece based on the title: ‘It’s a Mystery’.

Edward, Ben and Dylan had a mysterious, masked boy causing trouble in a school; Jack interrogated Rohaan over a secret; and Madeline and Ramsay were in Judge Crispin’s court to find out ‘whodunnit’ in Mrs Marshall’s murder trial!