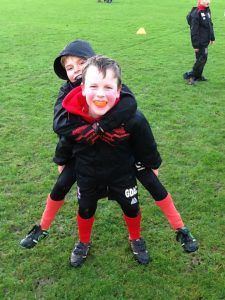 On a fine, but chilly winters afternoon, children from seven to eleven years old were joined by other local schools, to try out their rugby skills under the watchful eye of Dan Cook (Director of Rugby at Giggleswick School) and the school’s 1st XV Rugby Team.

Over 50 children thoroughly enjoyed being put through their paces to learn many new skills. They were taught how best to pass and hold a rugby ball, and to use their hands as targets when receiving a pass. Through a number of different learning drills the children were able to progress rapidly during the one and a half hour session. Many were able to demonstrate that they could pass with some degree of accuracy whilst standing still and even while on the move. The variety of different drills gave all who attended the opportunity to enjoy rugby.

Mr David Martin said: “The main aim of the day was that all the children returned to their respective schools with a smile on their faces and hopefully continue participating in the game.”

Edward Year 5 commented “ Playing Rugby makes me feel happier and healthier even though it was cold I really enjoyed the afternoon and the skills that were taught. I love being part of a team and tackling when it is muddy”

Some video footage of the drills

Lots of smiles and handshakes at the end of the afternoon.

Ghyll Royd School, Pre-School and Nursery is an independent preparatory school for girls and boys aged 2 to 11 years. Established 127 years ago, Ghyll Royd School is an accredited member of the Independent Schools Association based on the outskirts of Ilkley and ideally located for families living in or commuting to the surrounding cities, towns and villages of Leeds and Bradford.