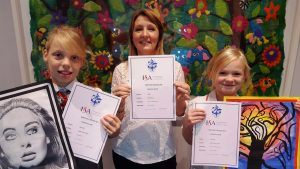 Pupils from Ghyll Royd School are celebrating winning four awards at the Independent School Association (ISA) Regional Art Competition, including first prize in the Textiles Group.
The ISA runs a number of annual competitions for pupils including Essay, Drama and Art, to give pupils and schools the opportunity to showcase their artistic talents.
Children in last years Forms 1 and 2 completed and entered a giant felt masterpiece depicting Rousseau’s jungle which was awarded first place.
Sophie in Form 3 was awarded 2nd place for her silhouette 2D art piece, Madeleine in Form 6 won Highly Commended for her celebrity split portrait of Adele and William, a member of last years Form 6 received first prize for his Jungle Cat painting.
Mr David Martin, Head Teacher at Ghyll Royd School and Pre-School commented, ‘ What a tremendous result for the children with each entry receiving a prize. We are delighted. The felt masterpiece has been framed and is now hung pride of place in the hall. The addition of Mrs Smith as our specialist art teacher has transformed Art at Ghyll Royd over the past two years. The children are now exposed to a wide range of techniques over and above the traditional painting and drawing. Felting has been a new additional alongside mosaics, 3D modelling and screen printing to name but a few. The children have loved the opportunity to explore their creativity in new ways and have producing some exceptional pieces of art at the same time. We now look forward to our entries future submission into the nationals. ‘