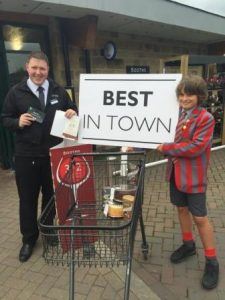 The Paperclip Challenge by Crispin Form 5

The Paperclip Challenge was inspired by Kyle MacDonald. What he did was he decided to start with his  one red paperclip and work his way up in value until he got to a house.

I was inspired by this idea so I decided to try it myself and record it for my school summer project.

I first went into Joules and they were very nice on the counter, then the assistant came from the backroom with some stickers as an addition to the cause.

After that I went into Mountain Warehouse and a very nice man traded my binder clip for a neck pouch with a retail of £6.99.

After those two successful trades I finally got a lot more confident, but it didn’t last because I was turned down at my next shop, Paperchase.  ? Next I went into White Stuff and the lady on the till gave me one of her pens for my other paperclip.

Then I went into Clintons Cards and got rejected but when I asked the other lady and she let me trade my pen for a ball of rubber bands.

Following on from that, a lovely lady at Ness gave my a free £5 voucher! ?

Then, in Bettys I traded my Ness Voucher for a £10 pound Bettys voucher!

So today I went into Booths and traded my neck pouch and my Betty’s voucher for a very generous selection of goodies including; 1 Chocolate Cake, 1 Lemon Cake, 2 Lindt Chocolate Boxes and a Greens & Blacks Dark Chocolate Bar! Wow, what a final trade!

And now, on what could be the hottest September day on record,  I’m planning on taking my sweet traded loot to Ghyll Royd School to share with all my class mates and teachers.

Ok so it’s not quite a house, but at least I succeeded in reaching my goal of getting something to share with the class.

Huge thanks to all the companies and people of Ilkley who helped me make this possible.