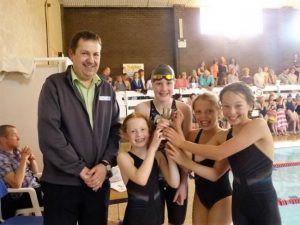 Over 100 children from eight primary schools in and around the Ilkley area took part on the annual Wharfedale Jubilee Primary Schools Swimming Gala.

The gala, now in its fifth year, was hosted by Ilkley Swimming Club and sponsored by The Co-Ops in Wharfedale (Menston, Burley, Ilkley and Addingham). Ghyll Royd were one of eight schools taking part in the event with each school competing in 16 events including boys and girls individual and relay races.

All the children swam extremely well with the leaderboard changing hands a number of times.

Ghyll Royd swam tremedously with the girls storming to first place and the boys an excellent third.