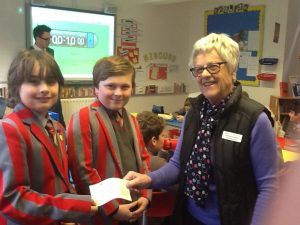 Children at Ghyll Royd School and Pre-School have chosen to raise money for a number of charities as part of their work within their school houses.

The House Captains were challenged by their Head Teacher Mr David Martin to decide with their respective house members to raise funds for a charity of their choice. Ghyll Royd School has three houses, all linked to the school’s naval heritage, those being Rodney, Drake and Nelson.

House Rodney decided to walk or run a mile for Mark Nurthen, who suffers from lung cancer and is a friend of a family at the school. Mark desperately needs funding to provide a new lung cancer treatment called Nivolumab which is administered by injection costing approximately £10,000 per injection.

The children raised £447 with one member of Rodney, Emaan in Form 4 raising £260 himself. The sponsorship has now been paid to Mr Nurthen who posted his thanks to Ghyll Royd on social media.

House Nelson chose to raise money for Aireborough Supported Activities Scheme (ASAS). ASAS is a registered charity which has been organising holiday play schemes since 1988 and residential activity breaks since 2003. These are aimed at children and young people aged 4-19 years with special needs in Aireborough and its surrounding district. Nelson House took part in various Bob-a-job tasks to raise money and they were delighted to present a cheque for £120.30p to Jo Galasso the schemes Project Manager during assembly.

House Drake decided to raise money for Martin House by holding a bake sale called the Great Drake Bake. The bun sale raised just over £72 which was present to Pam Ravenscroft from Martin House during an assembly.

The Houses then worked together to raise a further £748.00 for Sport Relief by each child in the school being sponsored to complete 10,000 steps in a day, taking their combined total to date to £1,339.

The House System operates throughout the school and enables children of all ages to mix, work as teams and have fun irrespective of personal ability. In Year 6 pupils are awarded the honor of House Captain offering opportunities to develop leadership and interpersonal skills by working with the younger members of their house in a variety of competitive and enjoyable events. The annual programme of house events extends far beyond sports, it also includes, quizzes, music, cooking, community and fundraising projects and an entrepreneurial week.

Mr David Martin Head Teacher at Ghyll Royd School and Pre-School commented, ‘We are always keen to support local and national charities whenever possible. By selecting their own charitable causes the children have taken a real ownership of their fundraising activities and have been delighted to be able to present the funds to the charities during our assemblies. Our next phase of working together in our house system is to support a local community initiative, which the children are already planning.’

Ghyll Royd School and Pre-School’s Early Years Open Week runs from 9th to 13th May with a whole school Activity Open Morning on Saturday 14th May from 9am to 12 noon. The Open Morning will feature a number of workshops including computer coding with the BBC’s Microbit.