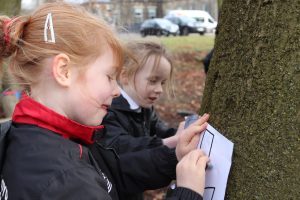 In the morning, Forms 1 and 2 met Mel Frances from the Woodland Trust. She began the session with a story called ‘The Man Who Planted Trees’ which the children listened to intently whilst sat around the campfire pit.

Then their challenge began! Pupils were asked if they could name the many different types of trees. That got the children thinking about which trees we need, and which we don’t. We need all trees, every single tree is important to our environment and so we need to make every tree count.

The Tree Dressing Challenge is one of the projects in the Green Tree Schools Award, so Forms 1 and 2 were set the challenge of decorating one of the woodland’s trees. With a clipboard and a number stencil, pupils drew and coloured in their number with things that remind them of the outdoors. Some pupils chose to make tree rubbings to give their number a textured look to it; others drew woodland animals; and some drew flowers. Tilly drew a fox, Isobel drew a squirrel and Freddie used two different wax crayons to make bright bark patterns.

Children made tree rubbings, and drew woodland animals and flowers on their number

When they had made their unique designs, the numbers were cut out and glued together. Then using a hole punch and some string, the children threaded and knotted the string to make their number a tree decoration. One by one, the class walked up to the tree and hung their number on the branch. The numbers looked brilliant and colourful as they blew in the wind.

Mel was extremely pleased with the results and thanked the children for their work and cooperation on such a cold, frosty morning. Thanks to Forms 1 and 2, Ghyll Royd are one step closer to Gold! 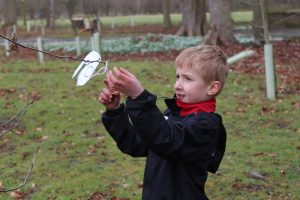 Eco Schools Day took place on Wednesday 14th March 2018, involving all pupils from Form 1-6, encouraging them to learn and explore their outdoor classroom, whilst learning more about the environment.