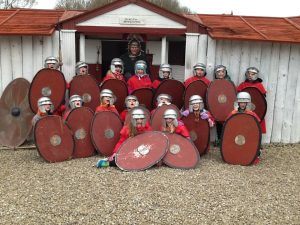 Forms 3 and 4 ventured to Brigantium this week to live like Romans for the day.

At Murton Park we went to the Celtic houses to see what life would be like. Next, we went to the Roman forts and got a tour. After that we all got changed into some Roman clothes and next we made oil lamps with clay.

After lunch, we learnt how to write in Latin and we wrote a letter to home. It was amazing! Outside, we dressed up in Roman army uniform. With a helmet, shield, and a long stick called a spear, we had to target Queen Boudica and the Celts. We then came head to head with a Celt and defeated him!

We threw coins into the pond to make a wish to the Gods and worshipped the Roman God.

At the end of the day we learnt how to do a Roman salute and we each received a coin to take home as payment. We had a lovely day at Murton Park, it was great fun!

Murton Park is based at the Yorkshire Museum of Farming in York. Take a look at what we got up to: